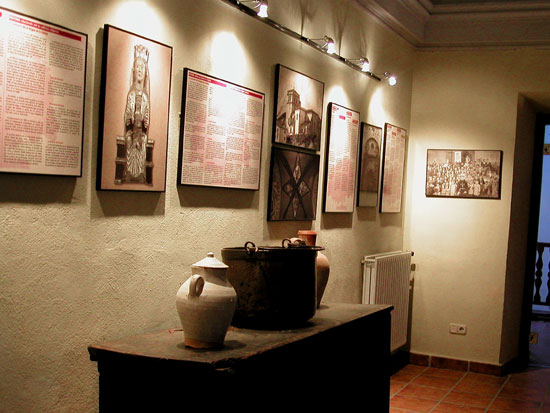 The territory that covers the municipal district of Artziniega was populated from distant times. The first remains of human presence were found in a cave located next to the church of Retes de Tudela. In an area close by, called Gordeliz, a Roman altar with an inscription in Latin was found at the end of the XVIII Century, and in the excavations carried out in the Sanctuary of La Encina in the second half of the XX Century remains of a human settlement were found with material elements of Roman culture dating to somewhere between the IV and VI centuries.

The written history of Artziniega begins in 1272, when the Castilian King Alfonso X the Wise, decided to make it a Municipality, and confirmed that it would be governed by the Jurisdiction of Biscay, the natural jurisdiction of the land, and by the Town Council of Vitoria for tax and financial matters. Until Tello’s death, it belonged to the Lord of Biscay. On his death in 1370, his brother the Castilian King Enrique II inherited it, and one year later he granted the valleys of Orozko and Laudio and the village of Artziniega to Pedro López de Ayala, the Chancellor. The Lords of Ayala and later the Dukes of Veragua, Berwik and Liria were given the prerogative of naming the Mayors until 1817, this right was not exercised in Artziniega, as even though it was owned by these Lords, it never strictly became part of the manor. At first, the Lord named a minister of justice, and later, the open council named its own representatives.

The medieval period was a troubled time in the Basque Country due to the faction wars. The most powerful Basque families were divided into two factions, Oñacino and Gamboíno, and for two centuries battles and bloody events took place, as each faction tried to impose itself on the other. Artziniega was also witness to an attempt of a blockade; during which, Pero Fernández de Velasco killed Juan López Salazar de San Pelayo in Mena. Another bloody episode took place in 1447 in Mendieta. Other victims of these raids were the foundry workers of Artziniega, as is shown in a Protection Charter granted by the Catholic Monarchs in 1491, against the abuses of the Largatxa de Iratzagorria lineage, with important interests in ironworks and the iron business. In the XV century the Municipality was ruled by Bylaws that regulated the political and economic life of Artziniega. Artziniega’s economy depended on the wheat crop, it had two mill wheels, and vineyards, apple trees, walnut trees and osiers were also cultivated, and pig breeding was also important; all of this was supplemented with urban trades, such as innkeepers, bakers, butchers, fishmongers, weavers, etc., the weekly market and the September fairs in La Encina, where tradesmen, cloth sellers, shoemakers, locksmiths, silversmiths, jug-pan makers from other areas also came to sell their goods. Around 1473 a supra-municipal organization, which included the Municipality and the neighbouring towns of Sojoguti, Retes de Tudela, Santa Coloma and Mendieta, under the name of the Council of Ordunte, decided to draw up Bylaws to put their relations in writing as regards the common use of the pastureland and land.

Middle Ages - to the French Revolution

This was a very significant period for Artziniega. Throughout the XVII and XVIII Centuries the town started to outgrow its walls and the space immediately outside the walls was occupied. Two communal grounds are known of, the upper ground and lower ground, in which the livestock was enclosed and the threshing was carried out. Emigration and trade with America lead to economic and cultural progress, through the creation of educational foundations promoted by local emigrants who had become rich in America. In 1590 Pedro Saenz de Ubaldi founded a Hospital in front of the Church, which centuries later was moved on two occasions to other buildings located in the outer part of the Municipality, alongside Cantón de Zubiaur on the first occasion and in the Arenaza area on the second occasion, and it held this function until the middle of the XX Century. On his death in 1608, a legacy of Pedro de Oribe Salazar created a School Foundation, which, after the generosity in the XVIII Century of José de Menoio, another Latin American of local origin, it also continued its function until the middle of the XX Century. These social changes lead to the need to modernize the legislation. Therefore, in 1615 the new Municipal bylaws were drawn up, followed by the Council of Ordunte’s bylaws in 1623. The importance of the Txakoli wine production lead to standards being drawn up on the care, regulation, grape harvest and sale.

In this period, Artziniega was consolidated as a regular exchange centre in the area. As a continuation of the urban extension, the urbanization of Upper Square started around 1814, followed by the Hill to La Encina. The rich and powerful in the surrounding areas moved to the Municipality and built their great houses, which later became summer residences for families from Bilbao and Madrid. The second half of the XIX Century witnessed significant work to modernize Artziniega in all aspects, and here we must obviously highlight the initiative and future vision of the authorities and residents of a town with only a thousand inhabitants, as they accepted and put into practice works that were more characteristic of a larger town. The innovations or renovations were produced in the health area, with the first transport of waters; in the administrative area, with the construction of a new building for the Town Hall, jail and municipal weighing scales (1864); in the educational area, with two new buildings for boys and girls schools (1893); in the commercial area, with the construction of a covered market square; in the social area, with the creation of the Old People’s Home (1887); and finally, in the leisure area, with the construction of the pelota court and the recreational casino (1892).