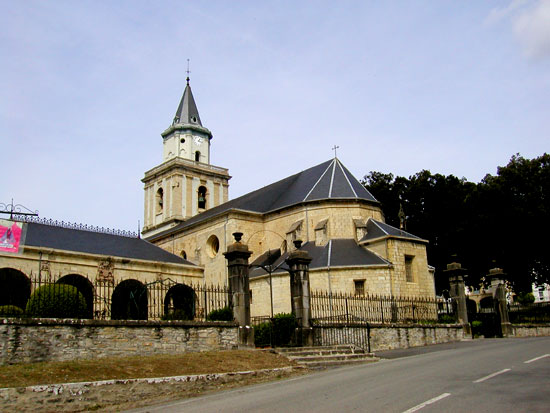 The antiquity of the use of this site, a place, where after a late-ancient and Roman cultural occupation (c. IV-VI), a temple would be erected in pre-Roman times and a second temple in Roman times 200 years later, has been confirmed with the discoveries made at the archaeological site and excavations inside the Sanctuary, in the second half of the XX Century.

The wood carving of the roman image of the Virgin that is present (c. XII) informs about the presence of a temple and the worship of the Virgin. The temple was built on the site where the image was found on an oak tree and, as with other places, a legend arose in which the Lord of Aiala disputed the right to build the church with Artziniega, and a divine intervention decided the matter in favour of Artziniega.

In 1404, Pope Benedict XIII established a Bull to support the important repairs to be made on the Sanctuary, and its current construction was concluded in 1498.

The temple, dated between the gothic and renaissance period, would later have chapels built; Christ’s chapel and the current vestry chapel (c. XVI-XVII), with a blind ambulatory that surrounds the base of the apse (c. XVII), a portico (c. XVIII) and an extension of the guest quarter, which is now the priest’s residence (c. XVIII-XIX).

Later, in 1882, the steeple was finished and slightly raised, changing its bell tower. A new organ was also provided, and in 1941, after a gale that destroyed the roof, the tiles were changed for slates.

The interior, distributed into three naves, contains several works of great artistic value, such as the Hispanic-Flamenco Gothic-style Great Altarpiece; the Renaissance Chapel of Christ, founded in 1608 by Pedro de Oribe Salazar; the Virgin of Guadalupe Altarpiece and her apparition painted on boards and donated from Mexico by a Latin American originally from

The Influence of his devotion extended to the bordering towns in Alava, Biscay, Burgos and Cantabria; this is shown in the testimonies that exist of the pilgrimages, miracles, votive offerings and even in the ships register, where the name of Our Lady of Encina was given to 6 ships of Bilbao during the XVII Century. In 1954 the Virgin of Encina was crowned in a mass meeting attended by the authorities of the aforementioned territories

View map of art and culture